D is for Discipline

That is one of the more interesting words in the English language, isn’t it? Whether a noun, or an verb, or even an adjective, it always gets my attention, my mind keying in on it like a compass snapping to true North. Sure, most of the time it’s used in a non-sexual connotation, but for pervs like me? It always makes me think of one of my favorite subjects;)

So, rather than subjecting you fine visitors to more of my blathering, I thought I’d include part of a scene from Maintenance Night here for this entry.

As this scene opens, Lacey, anticipating the delights that typically follow her Maintenance Night punishment, soon learns that her punishment is far from over. Quickly finding herself bound and blindfolded, her imagination goes into overdrive when her loving, but strict husband Troy begins strapping her tightly to the padded bench …

She felt heavy leather pass over the back of her lower legs, just above her bound ankles. Another strap, cinched brutally tight over her hamstrings, pinned her upper legs to the bench. She’d seen the straps hanging loosely from the apparatus, lazily waiting, like venomous snakes, anticipating the embrace of their victim.

His palm caressed the roughened, inflamed skin of her buttocks, squeezing the weight of her flesh in his hand. The strap over her thighs galled one of the still raw tramlines from the cane. Her unconscious wiggling of her legs against the implacable grip of the straps didn’t help matters, so she willed herself to stop it. The trembling of her body was another issue entirely.

She felt him move to the front of the bench, where her head lay low toward the floor, her long hair no doubt a black river pooling on the carpet. He lifted the remainder of her hair from her neck, and cold, stiff leather clasped her there too.

She jerked her head, not even thinking, and his hand twisted in her hair until she stilled, wincing, her scalp burning at the brutal stricture. She felt a tear slip under the cloth of the blindfold, to run crazily across the bridge of her nose. Absurdly, she wished her hands were free so that she could swipe the shaming tear away.

The collar tightened just a little, exerting a steady pressure on her throat, but not enough to constrict blood flow or breathing. He slipped fingers under the snug leather to ensure it. The feeling of the confinement of her neck was unlike anything she’d ever felt. She knew she was blushing to the roots of her hair, connecting the collar to that of a dog, an owned thing. Though it shamed her, it fired her lust anew. He was staking claim again, taking her to a new place. She never thought bondage would be something that could cause such a powerful reaction in her. Her drenched, seething cunt told her there were new horizons she still could explore. As Troy cinched down the collar with more straps, tying her fast to the bench, it was apparent he was intent on exploring them with her — whether she was ready or not.

She tried to move something, anything. All she could muster was the continuous, frenetic writhing of her fingers, the curling of her toes. His fingers played through the swollen labia, gathering the moisture there, a desultory, teasing play of fingertips across her achingly hard clit.

Then she felt the cold slipperiness against her asshole. She stiffened, the wood of the bench groaning.

His fingers spread her cheeks wide, and she was mortified anew at the view he was no doubt enjoying. The heels of his hands pressed her wider still, as if he would split her bottom in half, the stretching at her cleft almost uncomfortable. His thick finger liberally coated in cool gel, eased against her bottom hole, insistent but gentle.

“Just try to relax. We’ll go slowly. You need to be stretched first.”

“It’s not up to you, Lacey. Unless you’re giving me the word, this is happening.” His voice lowered. “Are you?”

His hand smacked her bottom lightly, leaving a slick of gel on a stinging cheek. “You can, and you will. I’ll help you through it, Lace. But before this night is over, you’re going to have my cock in your ass. Now be a good girl and cooperate.”

She whimpered as he slathered more cold gel into her cleft, swirling it upon the tender entrance to her ass. His finger pressed against her once more.” Let me in, girl.”

Lacey grunted, his finger a rhythmic pressure at her ass, increasing then lessening as he worked her. He lubricated again, the tip of his finger back at her stroking her bottom hole, coaxing, relaxing. “Push out now”

“Watch yourself, Lace.” The tip of his finger insinuated itself into her bottom hole, and she clamped down upon it. “No, don’t clench. Bear down, like you’re going to the bathroom.”

His big hand slapped her ass again, her flesh wobbling. “Just do it. You have to let me in. Bear down, now.”

She whined, the feeling of pushing out seeming so wrong, her need to obey her husband seeming so right.

“That’s it! Good girl.” She warmed at his praise, even as he pushed his finger deeper, awakening uncomfortable sensation within her ass. Her tight hole burned, stretched around his thick digit, and she panted at the pain.

“There we go. Keep pushing, girl. This is just my finger — my cock is a lot bigger than this.” He pressed his lips to her ass cheek, his kiss soft, almost reverent. She concentrated on loosening everything. The pain was there, but if she unclenched, stopped fighting, it lessened.

Her empty pussy ached, bereft, her hard clit thrumming. His hand drifted fingertips between the lips of her pussy, collecting the moisture, wiping it in lazy circles around her clit. “I guess I shouldn’t have worried about you being too scared,” he murmured, rich pleasure in his voice. She sighed as he frictioned her hard clit more intently, tweaking the sensitive flesh.

She let out a long whine as he pressed into her again, working his big finger in and out, thrusting with more authority. He pressed it as deep as it would go, his hard knuckles against the inner curves of her ass cheeks, the strange sensation of his fingertip wiggling within her, seemingly at the very core of her being. He recharged his finger several times with the cold gel, penetrating her anew, until she’d relaxed enough that each entrance was relatively easy, if still uncomfortable.

“I think we’re ready,” he said, wiping his finger on the back of her thigh, awakening the pain of the marks there once more. His palm patted the plump, smooth lips of her pussy. “I was only going to do this one time as part of your punishment.” He thrust two thick fingers deep into her pussy, thrusting roughly for a few seconds. “Judging by this dripping cunt of yours though, we may need to make this a regular feature, Lacey-girl.”

The uncoiling deep in her belly gave lie to her words.

“It’s not up to you, girl.” He leaned over, brushing his lips against her cheek, nudging the cloth of her blindfold. “Lets see how you do tonight, hmm?”

His hands took firm hold of her hips, squeezing her flesh in his possessive grip. The heavy cock eased up and down between her trembling cheeks, pausing to circle the cold slipperiness onto her cringing asshole. Her heart pounded in her chest, every muscle in her body tensing. They’d talked about trying it a few times, but it hadn’t been anything serious. She never thought he was particularly interested in taking her there, and she’d never really entertained the idea. She was a comparatively slight woman — and he was a big man. She wasn’t sure it would even be physically possible.

He pressed the broad head against her bottom hole, and she yelped. Oh, he was serious after all…

If you’d like to read the rest, and see what else our heroine Lacey experiences on her Maintenance Night, the book is available at all major retailers. Hope you enjoyed the excerpt! 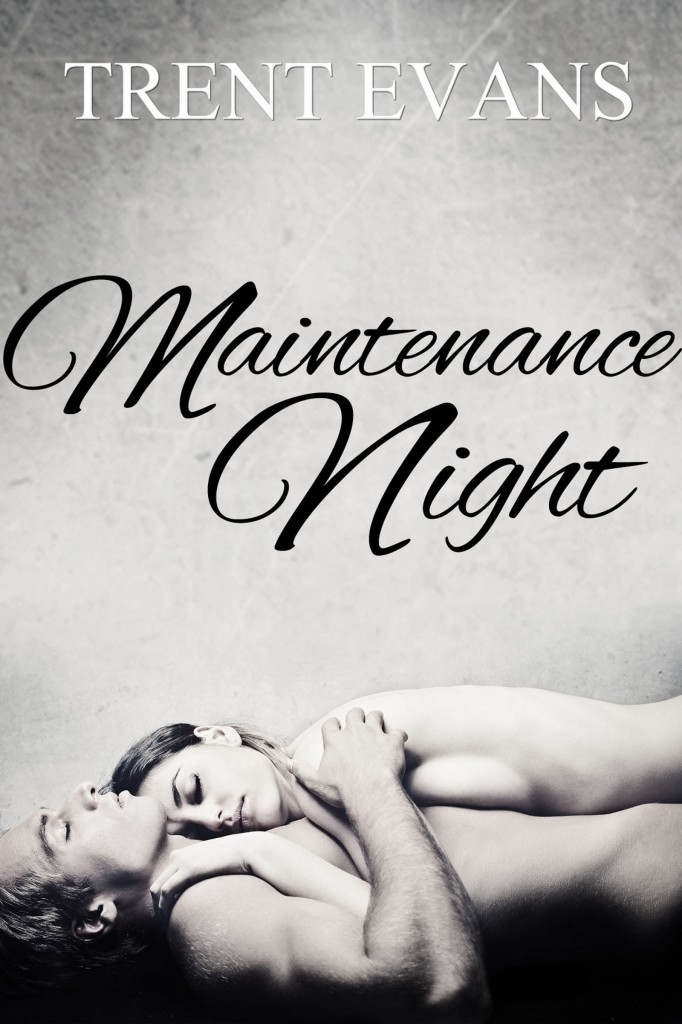 Take some time to visit some of the other great blogs and authors participating in this hop. Have fun!