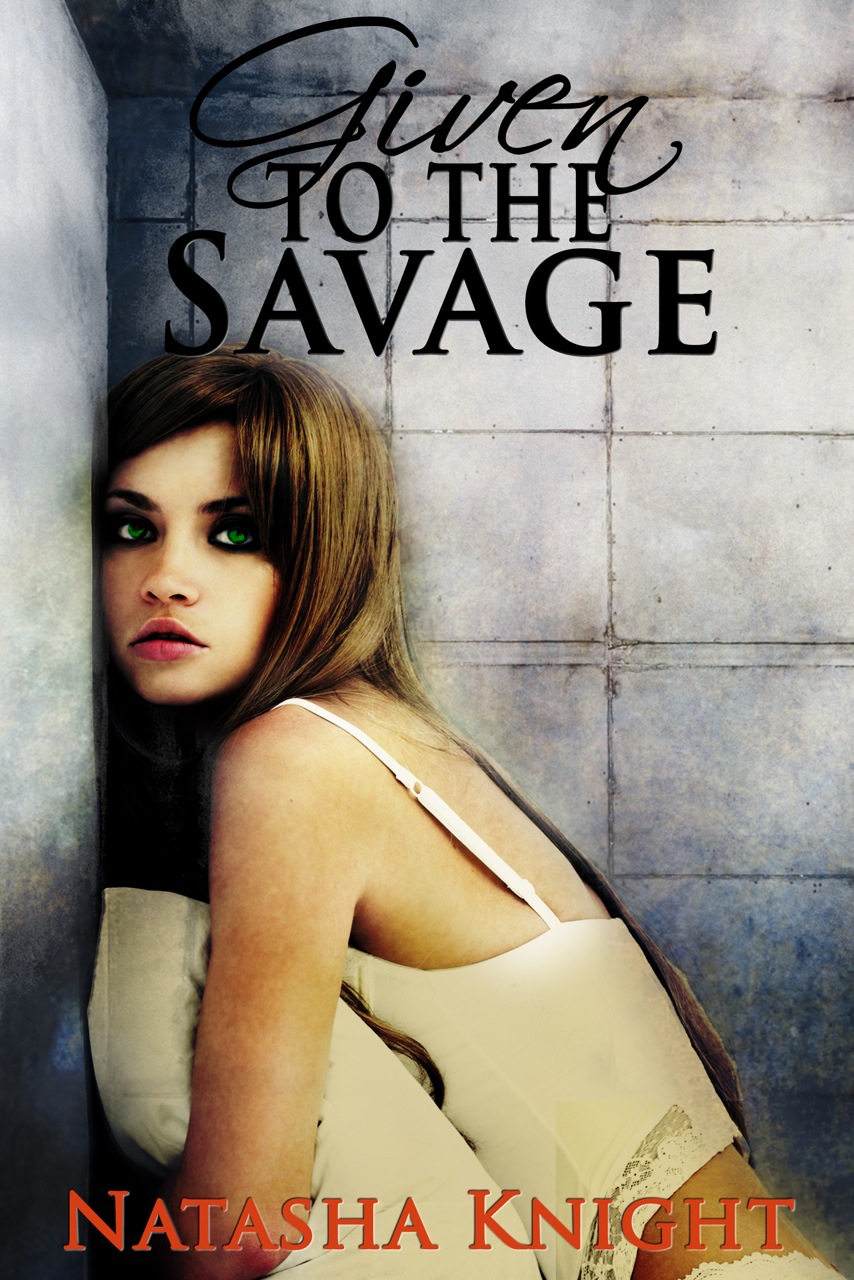 My friend Natasha Knight has a great new book out (get a look at that incredible cover), so I invited her over to the blog to share it with my readers. Take it away, Natasha…

Hi Trent, thanks for having me today to promote my new release, Given To The Savage. This book is a little different than what I’ve written before in that it’s a little darker, a little harder. As a romance, it does have the HEA though! It just takes time for Rowan and Silas to get there.

If you’ve been following my blog or even have read the blurb, you know that Rowan has been given to Silas to be bred. There’s a reason Commander did that (and yes, I am keeping that my little secret) but neither Rowan nor Silas know that true reason. Silas doesn’t like what he has to do: breed Rowan and return her and her children to the colony, but he has no choice, and Rowan knows her only hope for salvation is this savage of a man.

In the scene below, Rowan and Silas stand outside in the garden behind his home.  He’s just stripped her, the sexual attraction between them a palpable thing, and even as Silas tries to keep his heart closed to her, Rowan wants to understand him, to make him see her own tenderness, her humanity.

I’m going to stop rambling…here’s the scene. Just one note, I edited parts of the piece to keep from spoiling a bigger piece of the plot for those who haven’t yet read it so when you read this in the book, there’s a bit more…

“You want this even knowing your children will be taken from you? Knowing that once the two are delivered, you’ll be taken back to the colony?” Silas asked.

“They will be your children as well,” Rowan said, knowing it would wound him but a part of her somehow wanting to. Wanting to hurt him for not choosing her, not choosing her children, even as she understood wholly what doing so would mean.

“Breeders are made to breed,” Silas said, lifting her and laying her on her back on the hard wooden table. He watched her, almost flaunting his power over her as he unzipped his pants and released his cock. “I do not mean you harm,” he said, pushing her legs wide. “But too much depends on this, too many lives.” With that he pinned her thighs down and thrust hard into her, his eyes on hers all along watching her flinch in pain when he retreated and did it again. “Your fate was determined when you were born. I am not to blame for that.”

Another hard thrust, followed by another had her gripping the sides of the table. He was making a point.

“You come every time I fuck you, you’re wet every time I punish you,” he said, just touching her clit as he did. When she sucked in a breath, he squeezed it hard, calling a cry from her lips. “Come, breeder,” he said, fucking her faster now, pinching her clit between two fingers, pushing her knees up now, his other hand gripping one buttock hard, pulling it wide. “Come,” he said, his own voice breathy as she felt his cock swell inside her. “Or do you need more?” With that, his thumb was at her back hole, touching for a moment before pushing against it.

“Please!” she begged, her voice little more than a whisper as sweat covered her forehead.

He didn’t speak then, but pressed his thumb into her bottom hole while he lifted her and pulled her roughly to the edge of the table, impaling her on his cock, fucking her hard and fast, hurting her with each stroke while bringing her closer and closer to orgasm.

“Come!” he roared, slapping her hip hard with the command as if making her come somehow alleviated his guilt, somehow made her less human. “Come!”

As if on cue, she did, her muscles clamping hard around both finger and cock, milking the latter as it pulsed and throbbed, forcing his seed into her womb, teaching her her place, showing her that no matter what happened between them, she was only a breeder to him.

When he was finished with her, he slid his cock out, any emotion in his eyes masked. He zipped his pants and turned to walk into the house. Rowan stumbled off the table, her legs barely able to hold her as semen rushed down her thighs.

“They will be children too,” she said to his back. “Your children.”

I hate to leave you right there but…it is a teaser. Here’s the full blurb and links are below. If you do read it, I’d love to hear from you and thanks for reading this today.

In the aftermath of a plague which brought civilization to its knees and left most of the world’s female population sterile, breeders—the few women who remain fertile—have become a precious commodity. Breeders live in relative comfort, but upon reaching adulthood they are tasked with bearing one child after another to carry on the species. Frequent medical assessments keep the breeders healthy and harsh punishments keep them in line.

As a breeder who has just come of age, Rowan knows she will soon be little more than a slave, but when she dares to resist her fate the penalty is severe. After a shameful, public chastisement and a thorough, humiliating examination to determine her suitability for child-bearing, Rowan is given to a savage from outside the community—a huge brute of a man named Silas—to be bred.

Against all expectations, Rowan finds herself drawn to her new captor. Brave, ruggedly handsome, and even kind at times, Silas is everything the men who enslaved her were not. When the time comes for him to breed her, despite the circumstances something deep inside her begs for him to take her long and hard. But while she soon finds herself longing to be his forever, Rowan knows that eventually those who gave her to him will try to take her back. When that day comes will Silas fight to keep her at his side even if it means risking everything he loves?

*** Note from Trent: This book was originally posted as His To Breed. The title has subsequently been changed to Given To The Savage.