You are here: Home / Upcoming Publication / Cover Reveal and Excerpt from the upcoming novel “Falon’s Captivity” – Book #2 in the Spanked Wives series

Anyway, here’s the cover, along with the first of several excerpts I’ll share over the coming days. Hope you enjoy! 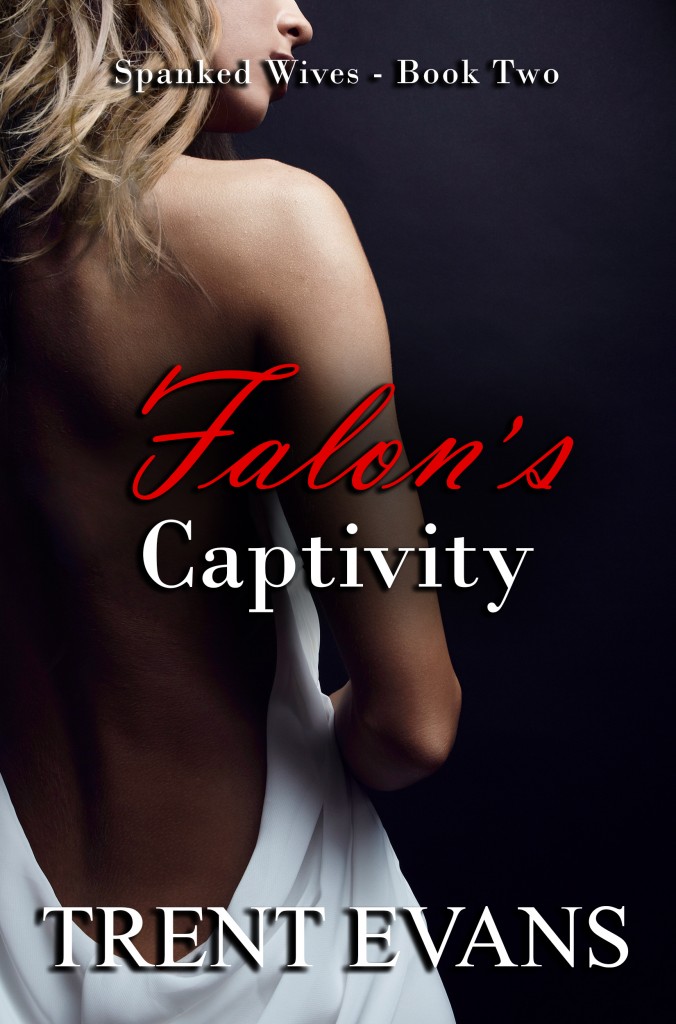 I didn’t know what was worse anymore — when he opened that door, or when he closed it.

How many times had I wondered? How many minutes had I counted until they’d fallen away in the blackness, as unmoored, lost, and hopeless as I felt?

But there wasn’t time for that.

The only thing that mattered was figuring him out. What was he really after? What did he truly want?

For the thousandth time, I cursed my stupidity, my hubris, my idiotic conviction that I could pull this off. It was a cruel irony of fate that a single, impulsive, split second decision could profoundly influence the rest of a person’s life.

I missed clothes — real clothes — not the all-access outfits he made me wear now. No, what I was allowed was little more than decoration, embellishment of the physical attributes of his new found toy.

How much more of this could I take? How much more did he intend to put me through?
What was the end game, when he finally got what he demanded?

I already suspected, deep down, that there could only be one end to this, a single conclusion to what this had become. My strength was ebbing away. I couldn’t deny it any longer.

What was the worse though was the temptation, the increasingly appealing prospect of simply…surrendering.

And giving him what he wanted…

And Sheriff Ford Mathis found himself questioning not only his own deep-seated needs, but what he might have to do if forced to choose between the town (and the way of life he loves)… and doing what was right.

Ford watched her in his rear-view mirror, her blonde sun-kissed good looks paler now, the set of her jaw betraying something different than fright.

Her blue eyes met his gaze. “You can’t do this, you know. You think arresting me is going to stop this shit from getting out?”

“That’s exactly what I think.”

He turned the truck onto Dyer Road. Though he hoped he’d never have to do this, he knew the protocol well in such cases. If she knew just how much trouble she was really in, he suspected she’d be a blubbering mess there in the back seat.

Falon, young, hapless producer girl or not, was a smart one. And tougher than she looked, if he had to guess. Things would have been much, much different if Deputy Anders hadn’t tailed her. The spot she’d chosen in the park was perfect for concealment. They’d never have spotted her in a million years. Who knew what god-awful chaos she’d have unleashed for White Valley if she’d slipped away?

“What am I being charged with, Sheriff?”

The new venom in her tone made him crack a grin. He liked a woman who didn’t just roll over and give up. [pullquote align=”left” cite=”” link=”” color=”” class=”” size=””]He respected that kind of strength, even though it wouldn’t matter in the end.[/pullquote]

“I’m sure we can think of something,” he muttered, stopping at the light where Waters Avenue crossed Dyer, the intersection marking the western edge of town. “Disturbing the peace comes to mind.”

“I don’t think a judge is going think much of that defense.”

“As if I’ll see a fucking judge,” she hissed under her breath, looking out her window again. “You didn’t have to leave these cuffs on, Sheriff. Not like I’m going to overpower mister Big Bad Cop.”

“I’m not taking any chances, Ms. Moore. You’ve already proven I can’t trust you. Until you’ve disabused me of the inclination to not trust you any farther than I can throw you, I’ll have to err on the side of caution. I think you understand.”

Her murmured curse wasn’t quite audible, but it didn’t need to be. He got the message loud and clear — she was going to fight.

“Where are you taking me? The station’s the other way, isn’t it?”

“Observant, I see.” He pulled the truck over onto the gravel shoulder, rocks jumping up and crackling against the undercarriage as he brought the Tahoe to a stop. He flipped on the light bar, then draped an elbow over the side of his seat, turning toward her. “We’re not going to the police station.”

“Why not? I need to make my phone call. Then we’ll see how you like it when you’ve fucked somebody in the press.” She smiled, a bitter edge to it utterly devoid of amusement or warmth. “You think criminals are bad? We’ll make your life hell.”

“Just keep quiet for a minute.” He paused, looking out his window. The first applicant in The Walk would be reaching the viewpoint soon, perhaps at that very moment. He was irritated at having to miss this one, but something — and someone — even more intriguing had fallen into his lap.

And that person currently sat cuffed in his backseat.

“Need to talk to someone — and being in town isn’t the best place for you at the moment.”

“Not the best place? What the fuck?” Her eyes were wide now. “I want to talk to a lawyer, Ford. Now.”

This was something she didn’t expect, and he knew keeping her off balance, uncertain, was the best way to handle her. She was a lot smarter than some might think, and he wasn’t about to give her an opportunity to prove it.

He lowered his voice, glaring at her. “If you’d simply listened to me, headed on out of here for greener pastures, this wouldn’t be happening. Now, you’ve forced me to do this — for your own good.”

“So, you’re arresting me — without charges — for… my own good?” She burst out laughing, looking down. “I can’t fucking believe this shit.”

“Believe it, Falon.” He faced forward once more, taking a deep breath as he brought the Tahoe back onto the road, gunning it up to fifty and leaving the lights on. “We’re going to have a little talk and figure out what we’re going to do with you.”

She was silent after that, another sign that she was a cooler customer than one might otherwise think. The more time she had to work out her situation, the more dangerous she was. Though he thought he could probably keep a handle on her, the girl would indeed bear watching. Close watching.

One thing was troubling him though. After he’d cuffed and stuffed her, he’d had a look at the documents she still had with her. She didn’t have much on her, but in her car they’d found a treasure trove of information, including laptops, tablets and thumb drives.

Most of the “dirt” she’d dug up on White Valley was exactly what he’d expected. That wasn’t the problem. Her source, which frustratingly wasn’t identified anywhere that they’d found thus far, had provided her information — damaging information.

The worst part of it though was that it was information that was entirely new to Ford. And if even half of it was true, Ms. Moore was going to turn out to be a whole lot more trouble than even he thought.

For the entire goddamned town.

That’s it for today. Check back tomorrow for another juicier excerpt from Falon’s Captivity🙂