You are here: Home / Upcoming Publication / Another excerpt from the upcoming Trent Evans BDSM/capture-themed science fiction novel, “Taking The Human” 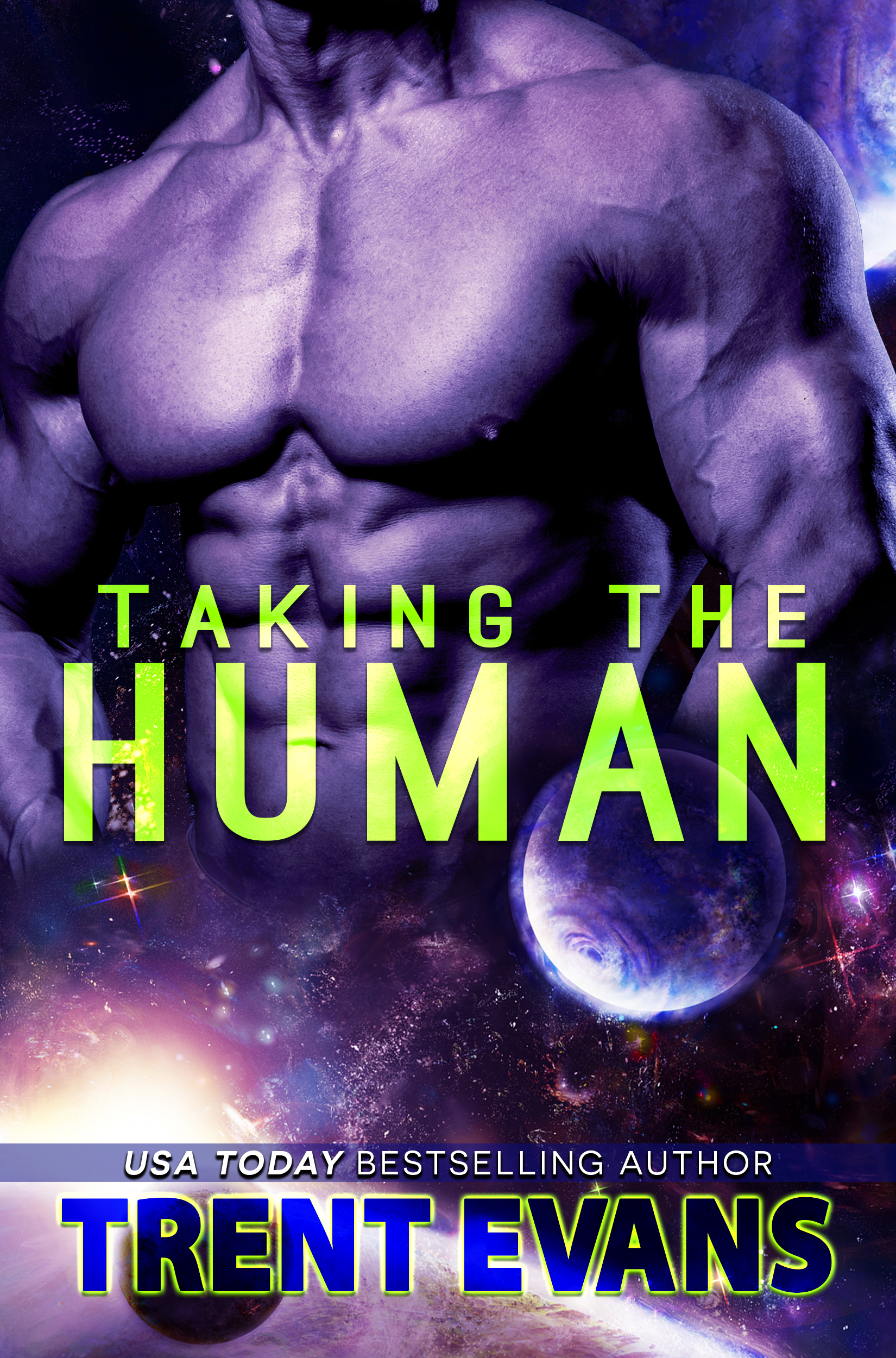 I wanted to post another excerpt from Taking The Human while we’re waiting for it to be published (just a handful of days away!). This excerpt directly follows the scene previewed in last week’s excerpt on this blog (go here if you’d like to read that excerpt first).

In this excerpt, Alisse, the unfortunate human captive, finds out the consequences for not behaving during her medical examination…

Setting his personal transport on auto pilot as soon as he lifted off from the rooftop pad of the doctor’s office, Lukanos climbed back into the rear passenger compartment, where he’d left the still-gagged Alisse. She looked small, almost lost, sitting on the huge seat, her legs tightly together, her hands clenched between her thighs in an unconscious gesture of self-protection.

She knew what was coming just as much as he did.

“You know the one thing I expect of you is obedience, don’t you? Just nod, if you understand.”

Plaintive sounds came from the gagged mouth, but he merely shook his head.

“Answer the question, girl. If I have to ask it again, it’s going to make things worse.”

She nodded, her pretty face paling.

“And did you obey in the doctor’s office?”

More sounds from the gag, and he sighed, taking her face in his hand, silencing her as he stared into her eyes.

She shook her head slowly, her eyes scanning his face frantically.

He sat down on the seat next to her, and turned his head toward her, patting his thigh. “I think a nice, hard spanking is appropriate.”

His cock was unfurling as he spoke, the prospect of having her sweet, round bottom exposed to his gaze once more filling him with giddy anticipation.

With one last pitiful look from her pretty, welling eyes, she turned to him, ready to lay over his thighs. He stopped her with a hand on her shoulder.

“First, I think we’re done with this.” He grasped the open neckline of the robe and tore it down, the sound of ripping fabric loud in the confines of the air transport. She yelped, her eyes going wide, her small hands wrapped around his forearm reflexively. He paused, noting the heaving of her now naked breasts, and the way the pink nipples had already stood up proudly.

Staring at her, he waited, knowing this was an important moment, a turning point of sorts, which determined whether or not she was ready to truly submit to being his. Her frantic eyes fixed upon him, her lips moving silently over the gag. Then her hands fell away, and she looked down, a furious blush flooding up her throat, staining her cheeks scarlet.

He beamed at her, the sense of victory sweet indeed. “You’re a good girl, really. Just need a reminder, I think.”

With two more breast-bouncing rips of fabric, he’d torn the tattered remnants of the gown from her body, leaving his slave girl, blessedly, properly, naked. She stared up at him, her breath coming fast, her eyes bright, liquid. He saw fright — and something else entirely — in their clear depths, and it filled him with a possessive, primitive lust.

With an unexpected meekness, she draped herself over him, her body trembling like the leaves of a dinhal tree. His cock was an aching hardness between his thighs now, and he took great pleasure in rubbing the bulge against her hip as he situated her properly for her punishment.

Later on, she’d be helping him take care of that problem too.

Her bottom was an absolute thing of beauty, and he took his time staring at it, caressing, and squeezing the heavy, broad buttocks one at a time.

He spanned her waist with both hands, framing the dramatic curve of the round backside below. Her pale, clear skin, with its adorable birthmark, called to him to do his worst, to show her the consequences for disobedience. He would enjoy doing so more than he cared to admit.

He laid a big palm upon her, his hand covering more than half her bottom.

“Do you deserve to be punished for disobeying me? For resisting the doctor?”

The shake of her head made him smile, but he tried to keep his mirth from his voice.

For a moment, she was still, then she nodded, reluctantly.

“So, you do agree then that you disobeyed me? Tell the truth.”

Hiding her face against the fall of her hair, she nodded slowly.

“Good.” He rubbed slow circles over her soft, trembling buttocks. “Then I’ll ask again. Since you disobeyed me, do you deserve your spanking?”

He loved this part, making her participate in her own discipline, forcing her to admit that she’d done something wrong — and was going to accept the consequences.

He’d never let her get off with just a skipping. She would know now that the pain she was about to experience was as a result of her misbehavior. Admitting it was sometimes harder than the punishment itself.

She’d be one contrite girl, before he got done with her spanking.

Finally, she nodded, and she dropped her head, as if ashamed to even be seen.

He was a very lucky man indeed.

The first blow was hard, the smack sharp and loud, the flesh immediately flushing pink. She stiffened, then relaxed once more, though she made no sound.

Landing two more hard smacks, one per cheek, she began to yelp, her skin coloring a deeper shade of pink with each blow. The fourth spank made her cry out, a leg lifting up. He slapped her thigh, gently.

“Keep your legs down, girl. Push your bottom out for me.”

His cock throbbed painfully as she obeyed, the round buttocks even more prominent now, the gap between them yawning wider, an inviting darkness within.

Then the spanking began in earnest, as he clasped her waist firmly, his cock grinding against her as he slapped those soft, vulnerable white cheeks over and over and over again. Within the first thirty smacks, she was keening, her struggles growing more and more frantic. When the crowns of her broad buttocks were a suitable shade of scarlet, he alternated targets, pulling up each cheek in turn, and whistling in spank after spank upon that soft, sensitive flesh at the crease where bottom met thigh. Soon, muffled shrieks accompanied each stroke, her hands wrapping frantically about his lower leg as he treated any remaining spots of alabaster flesh to a flurry of hard slaps, the deep red color now evenly distributed across her very warm backside.

He paused then, allowing his fingers to roam between the swollen, punished buttocks, her mewling changing pitch as he found the nuclear hot furnace at her core. Moisture coated her soft, engorged labia, her perineum slick with it. He touched the whorl of her anus, rubbing her essence into that delicate skin. Rather than clench tight though, she seemed to push back against him, inviting further exploration. He tapped the tiny opening with his fingertip, chuckling.

He palmed her seething, soft sex, easing the lips open as he caressed it, her heated fluids surprisingly hot upon his skin.

“Do you think you’ve had enough? Shall I redden those thighs too? Or have you learned your lesson?”

Her nodding was instant, frenzied.

“Good.” He pulled her up then, and she winced when her buttocks made contact with the seat. She looked up at him finally, strands of her long dark hair stuck to tear-streaked face. Her eyes were swollen and red, her nose running. He didn’t think she’d ever looked more beautiful to him.

She met his eyes then, and fresh tears spilled down her cheeks.

“Come here,” he whispered, and she surprised him by flinging herself into his arms. He held her in silence then, squinting against the setting afternoon light pouring through the windows of the transport. He let her sob against his neck, her arms and legs wrapped around him, his hands clutching her swollen, hot buttocks.

“Shh, it’s all over now. You were so brave. I know having the doctor handle you wasn’t easy.” He tried to pull her away to look upon her, tugging gently upon her hair. “I can’t get at your gag if you’re doing that. Would you like your gag off?”

Her head flew back, and she met his gaze, nodding, fresh hope in her welling eyes.

Unsnapping the catch from behind her head, he eased the bit from between her pretty white teeth. The corners of her lips were pink and inflamed. He touched them gently. “I’m sorry about that, girl. We’ll get something for that when we get home.”

“It’s all forgiven.” He smiled at her and her blush returned. He thought she might speak, her lips moving slowly, then she tilted her head a little, her pupils beginning to grow larger.

Then she pressed her soft, tear-soaked lips to his mouth, shocking him into utter stillness.

He let her kiss him for a few seconds, then submerged his hand in her tangled hair, pulling her back.

She kissed him again, even harder then. He kissed her back, tasting her tears, her fear, her abandon — and perhaps even her affection — for the very first time. The tip of her little tongue slipped between his lips, touching his, and he growled, clenching his fist in her tresses, his lust overpowering him. He pulled her away, staring into her eyes, seeing nothing in them but the same desire he felt. He pressed his lips to hers feverishly, savoring her, possessing her, her moans wordless but soul-deep. He hauled on her hair, exposing her vulnerable, pale throat to his lips, his teeth, his rumbled threats, his whispered promises.

He could take no more then, his cock angry, aching, and he pulled her close again, tucking her head under his chin, needing her there, against him, in his arms.

She burst into tears again, clutching him with a strength out of all proportion to her size.

He murmured and cooed to her, savoring every last millisecond of the sweetness found in simply holding her.

It was more than that though, it was the breaking down of her walls, of her surrender. There was more going on here than just a punishment of an errant slave. A bond had grown between them. He wasn’t sure what sort it was precisely, but he knew they both felt it.

The question was, what in space was he going to do about it?

This book has been so much fun to write. I hope you enjoy it too:) Until next time…

NOTE: If you would like to be the first to be notified when Taking The Human — or any other Trent Evans title — is published, the single best way to do that is to subscribe to my New Release Alerts mailing list. I only use it for new releases, and I never spam nor fill your inbox with chit-chat:) Only new books!