You are here: Home / Archives for thoughts on kink 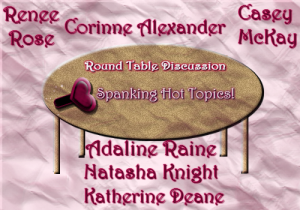 First of all, I want to thank the lovely ladies over at Spanking Romance Reviews for letting a dude get a seat at the table for this one. I hope I don’t make you regret it:)

This week’s topic is Submission and what it means to me.

First, it’s best to define for myself what submission means. I’ve never actually thought about what this means to me, so this will be a learning experience for me too!

Submission, at its core, is the voluntary relinquishing of control over one’s body, mind or spirit — or all of the above. At first blush I suppose that looks rather … scary. But when you think about it some more it ceases to be scary and instead becomes something very powerful, even beautiful. The reason for this is because it’s voluntary — it’s consensual. It’s something done to enhance the sexual pleasure of both the dominant and the submissive.

I — obviously — come at this subject from a Dominant male’s perspective so in some ways I’m a little like the kid pressing his nose up against the window, fogging up the glass, trying to get a glimpse inside the room where all the cool kids hang out. But, since dominance and submission are two sides of the same coin, I think I can speak (relatively) intelligently on the subject;) I hope so anyway.

D/s is essentially a dynamic of power and the unequal exchange thereof, and to me submission is the cornerstone of the endeavor. The submission itself is that exchange of the submissive’s power over self, given to the Dominant to do with what he wills. Just that aspect of it alone is mind-blowing — having that very real, yet equally symbolic, control over another human being. Of course, like so much in life there is a duality to this: the very same exhilaration from the Dominant’s perspective can of course be a dangerous thing, in the hands of an irresponsible, immoral, or just plain stupid Dominant.  So, in a sense, this awareness of the danger, of how easily that power can be abused, is part of the excitement of the D/s dynamic.

The ability of a woman to submit is a fundamentally brave act. To be blunt — I don’t know how the hell you subs do it! I’m just really glad that you do:) This is one of the many reasons why I admire submissives. They are courageous. To voluntarily make yourself subject to another is just … it’s stunning to me. I know it’s a cliche to say this, but that submission is a gift. It’s a statement saying: “I trust you not to abuse this power I’ve given you. I adore you, I care for you, I love you enough, to give you this, to make myself vulnerable to you.”

How different is this, really — when you strip everything away — from what a vanilla relationship is? At some point someone has to make themselves vulnerable, to open themselves to potentially being hurt, wronged, even betrayed. Yet, the urge to connect, to be intimate, gives us the courage to take that leap — because the rewards of intimacy can be so sweet, so profound. It’s worth the risk.

One of the things that appeals most to me about submission is the inherent vulnerability in it. I think it’s almost a proxy for the vulnerability often seen in femininity, that same vulnerability that speaks to a good man. The Dominant man feeds off that vulnerability; it fuels both his sexual excitement AND his urge to protect her. In the honest Dom (and in my case, a Dom with a sadistic streak) that vulnerability can fuel his need to exercise, to emphasize, his power over his submissive. Exerting your power over her is itself exciting, in its own way as exciting as the sexual acts themselves, because it involves that most important of sexual organs — the brain. Broken down even further, it’s almost as if the vulnerability of the submissive fires that primal, animalistic urge that exists deep down in the inherited DNA of humans, back to that duality of men, who eternally struggle with the urges both to conquer and protect.

I’ll circle back now, before I blather on any further. I can see everyone’s eyes are glazed over:/

Submission is trust. Trust is the foundation of the D/s dynamic and relationship. Just as pleasure cannot exist without pain, Dominance cannot be exercised (or enjoyed) without submission. Just as women make the world go round, submissives provide the essential, indispensable ingredient which makes D/s possible. Without it the world would be a gray, lonely place for men like me;)

Day 19: Any unexpected ways kink has improved your life? If so, what are they?

In many ways, this is one of those chicken or the egg/which came first questions. Have I embraced kink because my life has improved (e.g. I’m more comfortable with myself), or has kink demonstrably improved how I view and live my life? I don’t suppose it really matters either way when you get right down to it, as the answer is an unqualified ‘yes’.

In a larger sense though, discovering this entire world outside of your little tiny, insular existence is equal parts exhilarating, and humbling. Not only are you not alone, but you aren’t even that uncommon in the larger world of kink. To some that might be disturbing as it might lessen the sense of uniqueness that they may pride themselves on. Hard to tell, but for me, it was a huge relief:)

Secondly, kink has certainly helped me understand people better, even vanilla people. I’m going to take a wild guess here, and state that, by and large, kinky people are somewhat more open about sex and sexuality than most people. I understand that this is a gross generalization, but I think it’s probably fairly accurate. In my case, it’s definitely opened my eyes to the motivations of those around me, allowed me to perceive some of the subtler interpersonal interactions and cues that many of us are subconsciously aware of, but don’t necessarily consciously perceive. What I mean by this, specifically, is how driven many (if not most) people are by their base animal instincts. Modern human culture and social mores have necessarily put a brake on these urges, redirected them, channeled them into (sometimes) more constructive endeavors, but those drives, those urges, remain, as viscerally vital to all of us as fear or hunger are. This probably sounds like a bunch of foofy shit to most of you, but hopefully a few of you get what I’m trying to say here;)

Lastly, kink has unexpectedly allowed me to understand myself. It’s been a way to help me sort out who the fuck I am. I’m not particularly deep or complex, but oddly enough, those parts of me that were forever an inscrutable mystery to me have started to make a helluva lot more sense since I’ve been able to admit, to be at peace with who I am. Once I could make sense of the tangled mess that was me, it not only helped me understand others, it helped me empathize with others. My friend, and blogging partner over at Romancing The Kink, the talented Natasha Knight, has a famous quote at the end of her e-mails that I’ve always liked, and one it’s something that I think perfectly crystallizes what many of us who are kinky go through inside our own heads:

“Every man has his secret sorrows which the world knows not; and often times we call a man cold when he is only sad.” — Henry Wadsworth Longfellow

Jesus, this all sounds like self-indulgent navel-gazing from me, doesn’t it? I’m going to do all of you a big favor and STFU for now:)