You are here: Home / Archives for total power exchange 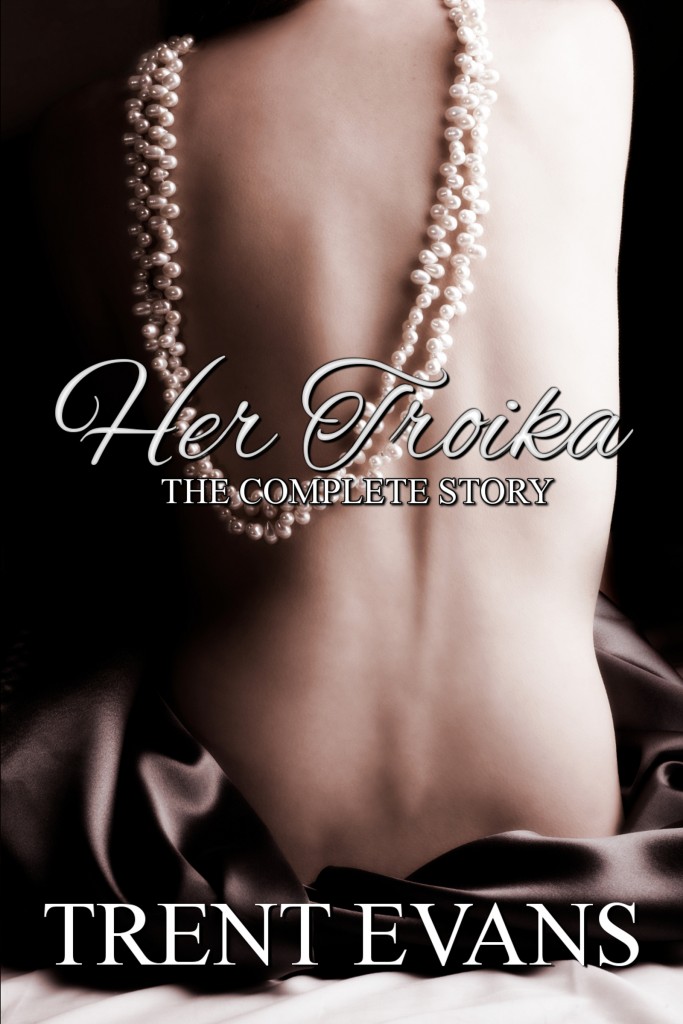 For those of you who’ve been waiting for the serialized story to finally be released as a collection, your day is here. The entire Her Troika serialization has been collected into a single volume, and published as “Her Troika (The Complete Story)”.  The list price is $5.99, but I’m leaving it at $4.99 for now. It’s currently available at all major retailers … except — as usual — Apple:/ I’ve no real idea when Apple will decide to allow it to go live, but my guess is within the next couple of weeks. A print edition is currently in the proofing phase, but when it’s ready I’ll announce it here too.

Two strict Doms, one brave sub, and a slave auction…

Kurt Erickson has been offered a Dom’s dream job. He picks his own hours, answers to no one, and gets to train submissive women all day. One of those submissive women happens to be his willing wife. Making Breanna’s deepest, darkest fantasy come true is the easy part. It may be trickier to persuade his best friend Derek to … buy her.

Breanna Erickson prides herself on being ready for anything. From the courtroom to the bedroom, she can handle it all. But when her strict, but loving, husband gives her the chance to live out a dream, she finds there are things no woman can be ready for.

Derek’s marriage ended because he buried dark needs that proved incompatible with a vanilla wife. He’s buried those needs, those truths, deep down, determined to never let them hurt him again. Being Kurt’s best friend has many benefits, but some of them are much more than Derek is ready for — or so he thinks.

Publisher’s Warning: Intended for mature readers. 18 and over only!

I think all of us have central themes or persistent imagery that we keep coming back to in our sexual fantasies; it would be human nature to keep doing what “works” 🙂 One of the central fantasy themes for me is the idea of consensual non-consent. Essentially what this means is that a sub or slave gives her Dom or Master an initial blanket consent which from that point onward allows him to do whatever he likes, whenever he likes — whether she wants to at the time or not.

Why does this appeal to me? To be blunt, I think it’s a “safer” way to play with the fantasy of force. It’s extremely difficult for me to say this, but if I’m going to be intellectually honest, I think this is the unadulterated core of the consensual non-consent kink.

For men especially, the idea that forcing someone sexually is culturally, morally, and legally ingrained into us as being wrong—and outside of a consensual non-consent sexual relationship it IS wrong. But fantasy, which (I believe) is just a way for the mind to process and integrate lower, baser urges into our individual moral consciousness, doesn’t stay within those sensible boundaries . . . nor should it.

(I need to reiterate here that just because a man may be turned on by the idea of consensual non-consent, it DOES NOT mean in any way whatsoever that he is turned on by forcible rape. Please note the word ‘consensual’— it makes a world of difference. There, equivocation over.)

Humans evolved in a harsh, unforgiving world, and like the animal kingdom as a whole, humans survived by adapting. It coarsened us, this requirement to follow baser urges and instincts in order to survive. After all, early man likely saw little use for pondering why the sky was blue as he was being chased up a tree by a smilodon. Early man learned to harness, to mold, to conquer, and those instincts, those urges, are still with us today — whether we want to admit it or not.

But circling back to the disconnect between fantasy and reality, there are certainly problems with the nuts and bolts of consensual non-consent. Chief among those problems is that it would be tiring. What, you say? Tiring? Well, yes, it would be. Personally, I very much enjoy women, and find them interesting to talk to, live life with, love. I would not be able to sustain the constant formality such a framework demands. In modern society, it would take an incredible amount of effort, and literally rearranging ALL aspects of both the Master’s and slave’s lives. Anneke Jacob tackles these day to day challenges in a truly fascinating way in her masterpiece As She’s Told. In that story, it quickly becomes apparent that no matter how much two people really want full 24/7 TPE, modern society is built in such a way as to make it practically impossible (and if we can take a step back from our kinks, we will see that this is in fact a very good thing.)

While 24/7 TPE consensual non-consent is indeed an incredibly powerful fantasy, the logistics of it just make it something that really couldn’t be done in modern society. In Jacob’s book, the compromise becomes instituting it whenever and wherever possible, but allowing for those times when it’s just not possible. The result is a constant undercurrent of excitement, fear, anticipation and most of all, lust. Such is the stuff fantasy is made of, no?

What is missing though are those small, quiet moments in life. The ones that we’ll remember on our death beds. The feel of her hand in yours as you walk through the chill night air, her brimming eyes as she catches first sight of her newborn child, the comfort of her embrace on a sleepy weekend morning. These are the things of day to day life that are just as important as the fulfillment of our fantasies. So, in effect what I am saying is that I think the reality is that you can have a 24/7 TPE relationship framework but that the actual execution of it would need to be flexible enough to meet the exigencies of our hectic, modern lives.

Again, this is a question that deserves a much longer, more in-depth answer, but since I am approaching a thousand words of flapping my gums, I will just leave it here;)