You are here: Home

I know it’s been a long time since I’ve posted, so I thought now might be a good time to update you on what’s been happening.
END_OF_DOCUMENT_TOKEN_TO_BE_REPLACED

Today is the last day to get Bound, Spanked and Loved for only $.99.  Tomorrow the price will jump to $3.99 and at the end of February, the set will disappear altogether and authors will release their individual books, if they choose. That’s why we’re saying this box set is a $40 value — once the books come out individually, that’s how much it would cost you to buy them all!

If you haven’t grabbed yours yet, please download it now…
Amazon | iTunes | Nook | Kobo 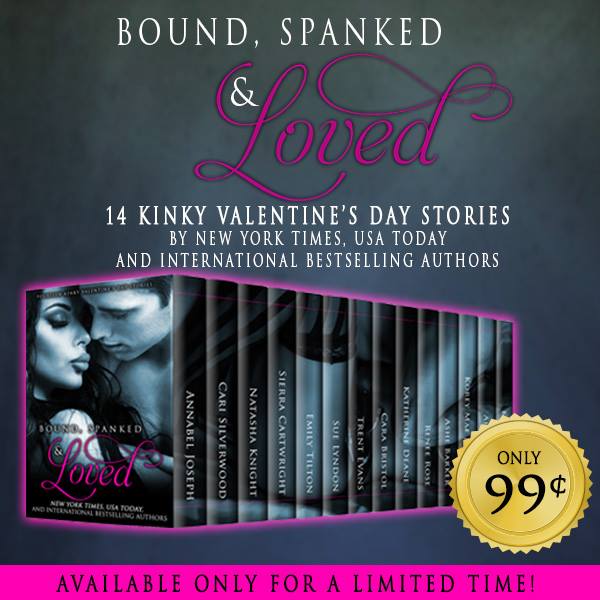 Falon’s Captivity, book #2 in the Spanked Wives series, should go live in the next few hours, but there’s still time to share another excerpt;) In this clip, the mysterious ritual known as The Walk begins….

And Sheriff Ford Mathis found himself questioning not only his own deep-seated needs, but what he might have to do if forced to choose between the town (and the way of life he loves) … and doing what was right.

Lacey never knew they’d take away even her sight.

Her heart began to jackhammer in her chest as the blindfold descended, the morning breeze impossibly cold against her hardened nipples. She wished she could hear Troy. Even the sound of his voice would help her endure this.

While the idea held a sort of twisted allure to her, the reality of The Walk was so intense, so overwhelming that she didn’t know how she’d ever complete it. That she longed for Troy’s touch, even in the midst of her public debasement, only made things more confusing. END_OF_DOCUMENT_TOKEN_TO_BE_REPLACED

Anyway, here’s the cover, along with the first of several excerpts I’ll share over the coming days. Hope you enjoy! END_OF_DOCUMENT_TOKEN_TO_BE_REPLACED

As promised my new novel, The Spanked Wives Club, is finally live on most of the major retailers (Apple… well, it seems this book won’t be appearing there. Ever. If you’d like to learn the full story, drop me a line.)

Now, if you’d been a subscriber to my New Release Alerts mailing list, you’d have been the very first to be notified — and had a chance to purchase the book at an even deeper discount. Just throwin’ that out there:)

This new novel, while a quasi-sequel to Maintenance Night  (those readers clamoring for more of Lacey and Troy will be quite happy with this book), marks the beginning of a new series for me. While very much in the spanking sub-genre, the series will at times explore significantly more, um, intense themes — including capture/captive fantasy, dark romance, and dubious consent. I hope you enjoy it as much as I did writing it!

Now, on to the particulars … including a new excerpt!
END_OF_DOCUMENT_TOKEN_TO_BE_REPLACED